The Art of Homecoming

This year the tension was high with the competition for the Jug, and even though it was intensely controversial, never had so much effort been put into the artwork of Homecoming than it had this year. As per Homecoming tradition, the grades spent the Friday and Sunday before homecoming week decorating a chunk of the school with their theme. This year’s themes were Classic Fairytales, Grimm Fairy Tales, Mythology, and Disney. As someone who spent weeks preparing for the decorating day, I can say that a lot of time and effort gets put into this activity. Many different materials were used this year to try and get the upper hand on other grades. Along with the customary paper and streamers, students also used glitter spray, stickers, a concoction of mod podge and paint, and even a real bedsheet. 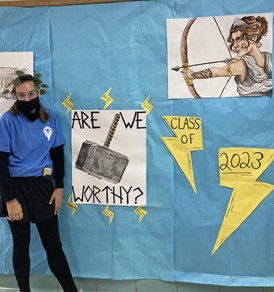 Although the heat kept tearing everything down, you could find the students and teachers taking time out of their study halls to carefully put everything back up. Even though only a small group of students worked on the decorations, each grade made sure to include everyone’s name somewhere in their hall to show that we were all in this together on the project. My favorite part is working together with my friends and seeing a blank canvas turn into a masterpiece. Running around the hallways is a close second though. No matter the theme, or the year, getting the school ready for homecoming will always be a cherished activity full of school spirit.

*Disclaimer: most of the artwork is going to be from the Junior hallway because the other hallways fell down due to the sudden humidity.